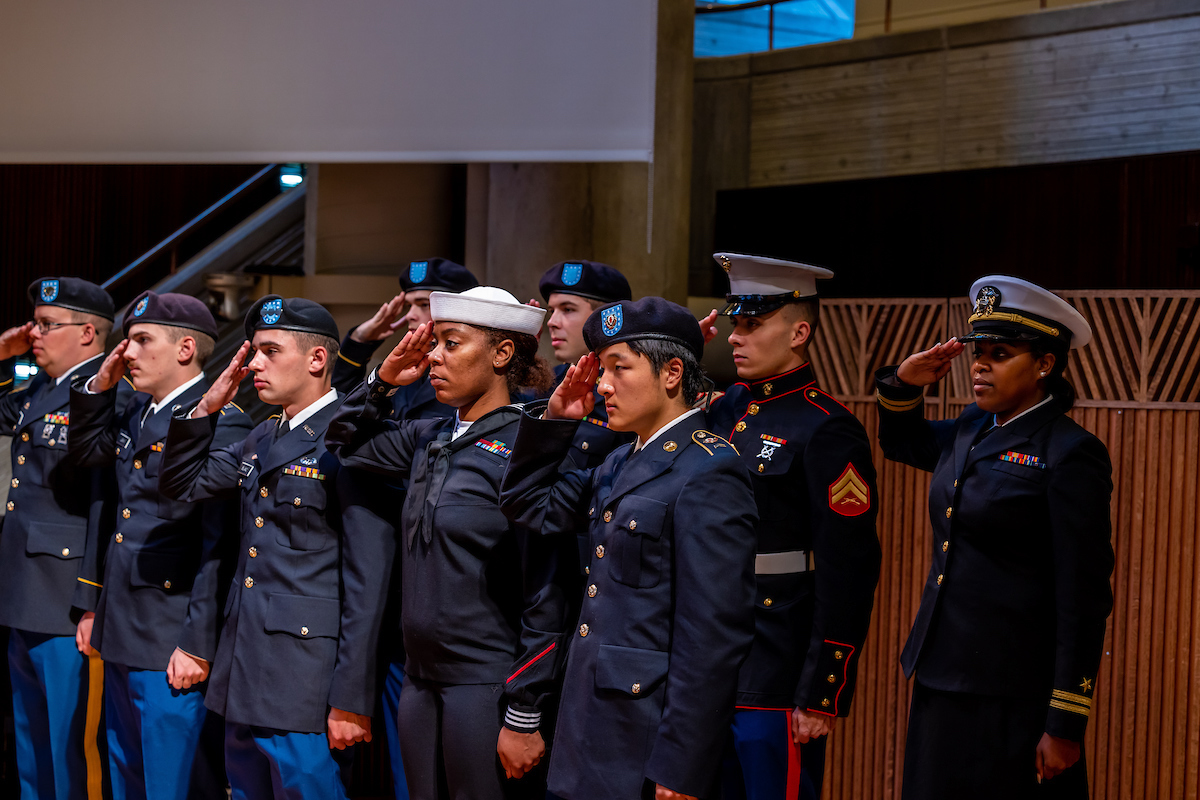 The Emory community gathered at Cannon Chapel on Nov. 11 to celebrate the 14th annual Emory Veterans Day commemoration and reflect on what it means to serve – both in and out of the military.

Matt Ball, an MBA student at Goizueta Business School, served as emcee. Ball welcomed attendees and initiated a moment of silence for Armistice Day and all who served. The honor guard, made up of Emory veterans and Army ROTC cadets, saluted the flag during the national anthem.

Guest speaker Matt Wain focused on continued service for those around you. Wain is the CEO of Emory University Hospital, Emory University Orthopedic and Spinal Hospital, and Emory Wesley Woods Hospital. He is also a retired US Army helicopter pilot who served in the Army and National Guard from 1988 until his retirement in 2008 as a Major.

“I would like to think that we are not what we did, but we live as we served,” Wain said. “It is an idealistic call for many of us, surrounded by the pursuit of peace through strength, our ability to bring peace across the world and secure the freedom of our neighbors. For many of us , we served as best we could – and it continues today.

Wayne also acknowledged his family members and other well-wishers. “As veterans, I think we have the easiest task. There is a day for us. A yellow ribbon at our departure. Yet there is a family member, or spouse, or someone who loved us and should be remembered today. They were ready to support us and our calling at a time when there was uncertainty and their own difficulties, but they spent that time being able to serve us.

Continuing Service for and by Veterans

Service and gratitude were also at the heart of the concerns of the other participants in the ceremony.

Don Cornwell, director of career services for Emory College and chair of the Emory Campus Life Veterans Committee, is an Army veteran. Today, his service has taken the form of supporting veterans at Emory — both highlighting what the university already offers and identifying gaps that could be filled.

“I connect student veterans to the resources available to them, assess their needs, coordinate with support from other veterans on campus, and ultimately celebrate the veterans who are here, highlighting their contributions to the university,” said he explained.

Next, Cornwell works to deploy a needs assessment to identify how this population likes to work, what activities and programs would be most beneficial, and what existing strategies are working. In other words, how to better serve them.

“It’s closely tied to the Emory Student Flourishing initiative,” he said. “It helps them feel comfortable with their chance to contribute to an academic environment, and veteran students have so much unique experience outside of the classroom that they bring. We want to help them identify career paths and find that purpose in life after Emory.

“For me, Veterans Day is about thanking and honoring everyone who came before us and made it possible to be here today,” he said. “When I thought about what I wanted to do moving forward, I found Emory to be a great way for me to pivot my career from active duty to business. It’s true.” Castillo looks forward to bringing his unique perspective of the military to his classes and, eventually, to the business world.

When it comes to Veterans Day, Jerome Miller reflects on how others have helped him. “I think of the other guys I started out with in the military when I was just a junior officer,” he explained. “I modeled my technique as an instructor on that of my own training officer, and I taught the way they taught. I know that there are young pilots who still take advantage of these techniques.

Miller, who is studying law at Emory, was a navy captain and an MV-22B Osprey pilot — positions he says are mostly held by white men. “As a junior officer, it was hard to find role models, but there were senior pilots who took me under their wings,” he recalls. Miller began reading about organizational leadership, race and race in the military and specifically “Why are all the black kids sitting together in the cafeteria?” by Beverly Daniel Tatum. Miller also turned to his father, a Navy officer who served as the first black officer on a submarine, for advice.

And just as Wayne suggested, Miller’s current goals are also about serving. Growing up, he wanted to become a lawyer to help people. On his second deployment, he received a letter from an elementary school in Kennesaw, Georgia. “A little girl wrote, ‘Do you have anything to be grateful for? I do this is to be able to be educated as a black woman and not have to be a slave. It really centered me and brought me back to my goals in life.

Miller still has that letter. He plans to first work in a law firm and then use the network of lawyers to create an organization to support black students who want to pursue a career in the legal field.

Through the yellow ribbon program, Emory provides funds to help post-9/11 veterans pay for education costs beyond what is covered by the GI Bill. Learn more about veterans education benefits at Emory.

Undergraduate students considering a military career can participate in Army or Air Force ROTC through a cross-enrollment agreement with Georgia Tech and Kennesaw State University. Students complete their undergraduate degrees at Emory and their military training at Tech.

The Nell Hodgson Woodruff School of Nursing at Emory is one of 18 nationally selected elite nursing schools Veterans Nursing University Partnership (VANAP) through the US Department of Veterans Affairs. Undergraduate and graduate nursing students selected for the program gain valuable training to provide quality care to our nation’s veterans.

The Emory Law Volunteer Clinic for Veterans provides pro bono legal services to veterans, assisting them and their families with legal issues, including Veterans Administration disability claims and subsequent appeal proceedings, estate work and release upgrades before the Ministry of Defense.