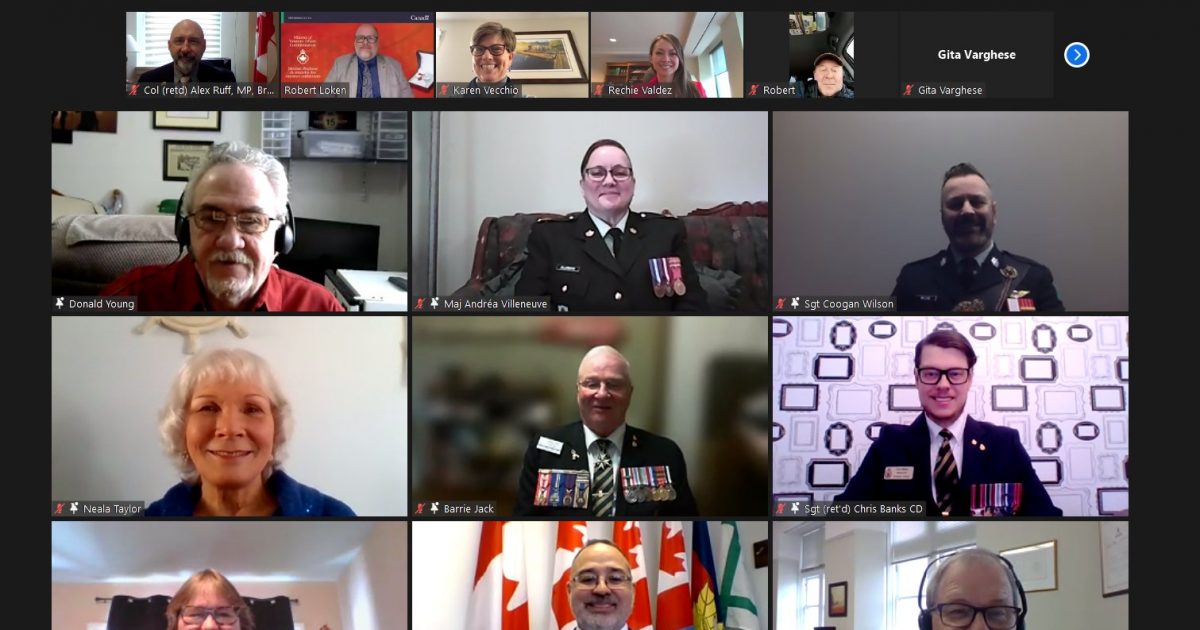 Minister of Veterans Affairs and Associate Minister of National Defense Lawrence MacAulay presented the awards in recognition of their work to improve the care and well-being of Canada’s Veterans. The ceremony was also attended by Conservative MP for Bruce-Grey-Owen Sound, Alex Ruff.

MacAulay said in a statement that the Veterans Affairs Minister’s Commendation is the highest honor he can bestow, adding, “I am extremely grateful for the wide range of volunteer work they have undertaken. The quiet community work done by people who don’t expect recognition for what they do is what really makes the difference. And for me, it’s even more important when it comes to helping and honoring the people who have served our country.

Robert Barrie Jack of Owen Sound was recognized for his service with the Royal Canadian Legion. The Federal Government says Jack is the Veterans Services Officer for the Royal Canadian Legion Branch No. 6 in Owen Sound. His nomination page reads, “In this role, he works diligently to ensure the well-being of Veterans. This ranges from assisting with disability claims, helping homeless veterans with temporary housing, food and emergency debt relief, to hosting veterans dinners and visits to retirement homes.

The appointment continues: “He is an integral part of the organization of the annual Remembrance Day ceremony and is always available to help families organize funerals and memorial services. Much of his volunteering as a service officer with the Royal Canadian Legion is a lifeline for area veterans. He always devotes time and effort, on and off duty, to caring for and remembering veterans.

Jack’s nomination page indicates that in addition to his work as a duty officer, he helped raise thousands of dollars in emergency donations to help veterans.

Corporal (Retired) Donald Edward Young, who is also an Owen Sound resident, was nominated for his work with the Canadian Veterans Freedom Riders (CFVR).

Young joined the Canadian Veteran Freedom Riders in 2014 where he served as Treasurer of the Bruce-Grey-Owen Sound Long Range Reconnaissance Patrol (CVFR LLRP).

His nomination page reads, “He is an integral part of the unit, contributing thousands of hours to the welfare of local veterans in this community. It helps homeless veterans with temporary housing, food, and emergency debt relief, while soliciting donations from local community businesses. As of July 2020, his efforts have led to four major gifts totaling over $12,500 to aid Freedom Riders’ mandate to provide emergency aid to local veterans in need.

He continues, “Cpl Young is a true team player who continues to participate in the CVFR food drive by helping the local food bank and veterans.

Young assists the Owen Sound Legion with the Poppy Campaign and represents the Freedom Riders each year at local Remembrance Day ceremonies.

His appointment reads, “Much of the volunteer work he has done as Treasurer and Member is a lifeline for local veterans as he continues to dedicate exceptional time and effort to ensure the veteran community is supported and honored.”

The commendation consists of a certificate, a lapel pin for civilian clothes, and a bar to wear with decorations.

The design is a golden maple leaf resting on a red poppy, with the royal crown on top of the pin.

Great to see WO (Ret) Barrie Jack and Cpl (Ret) Donald Young honored with the Minister of Veterans Affairs Commendations yesterday. Congratulations to all the recipients for making a difference to our #Veterans and our #communities! #BruceGreyOwenSound https://t.co/zh0mkMynrp pic.twitter.com/YE9O4mJUWB